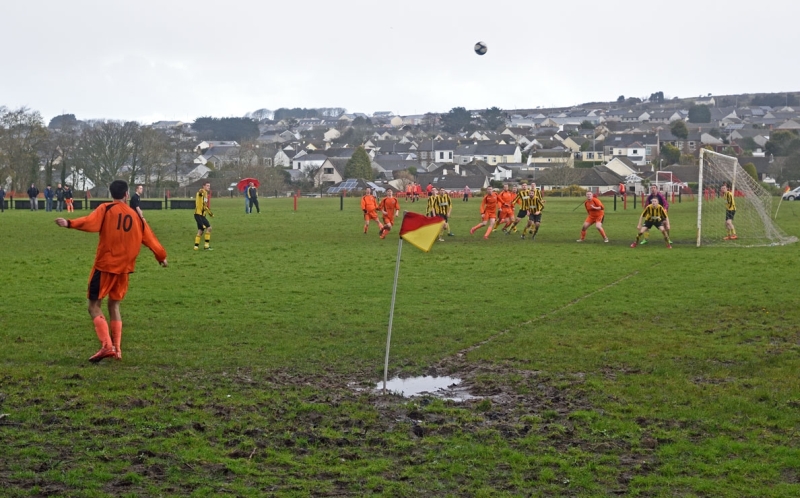 Darren Luke has for several years been photographing the landscapes of grassroots football in Cornwall. His work has appeared in When Saturday Comes magazine and websites such as inbedwithmaradona and pkfoot.

It may seem curious that Darren Luke’s photographs have been included in an exhibition investigating the sounding cultures of football but I have spent a lot of time recently thinking about the immanent sonic qualities of objects, their auditory histories, the sounding history of their construction, and the resonant environments that they will have passed through before reaching their present location. This led me to think about photographs as sounding objects that contain within them the sounding past, present and future. As the eye scans the image – left to right and right to left – multiple sounding events can be read: the thunk as the ball is struck perhaps releasing a light spray of surface water; the flutter and snap of the corner flag in the breeze; the sound of water slowly soaking into the saturated soil; calls of away! keepers! ref! as the ball is met in the penalty area push up! out! out! out! as it is cleared – or perhaps a goal was scored or a header cracked against the crossbar followed by gentle jogging back to the halfway line – boots sounding the mud. The keeper retrieves the ball and places it for a goal-kick. There’s an umbrella on the far side of the pitch. Perhaps it is still raining – the soft patter as it soaks into the earth. Goalkeeper bangs his studs onto the metal goalpost, squelch and thunk of the goal-kick. Shouts of big head! big head!

You can see more of Darren Luke’s photographs of Cornish football here.