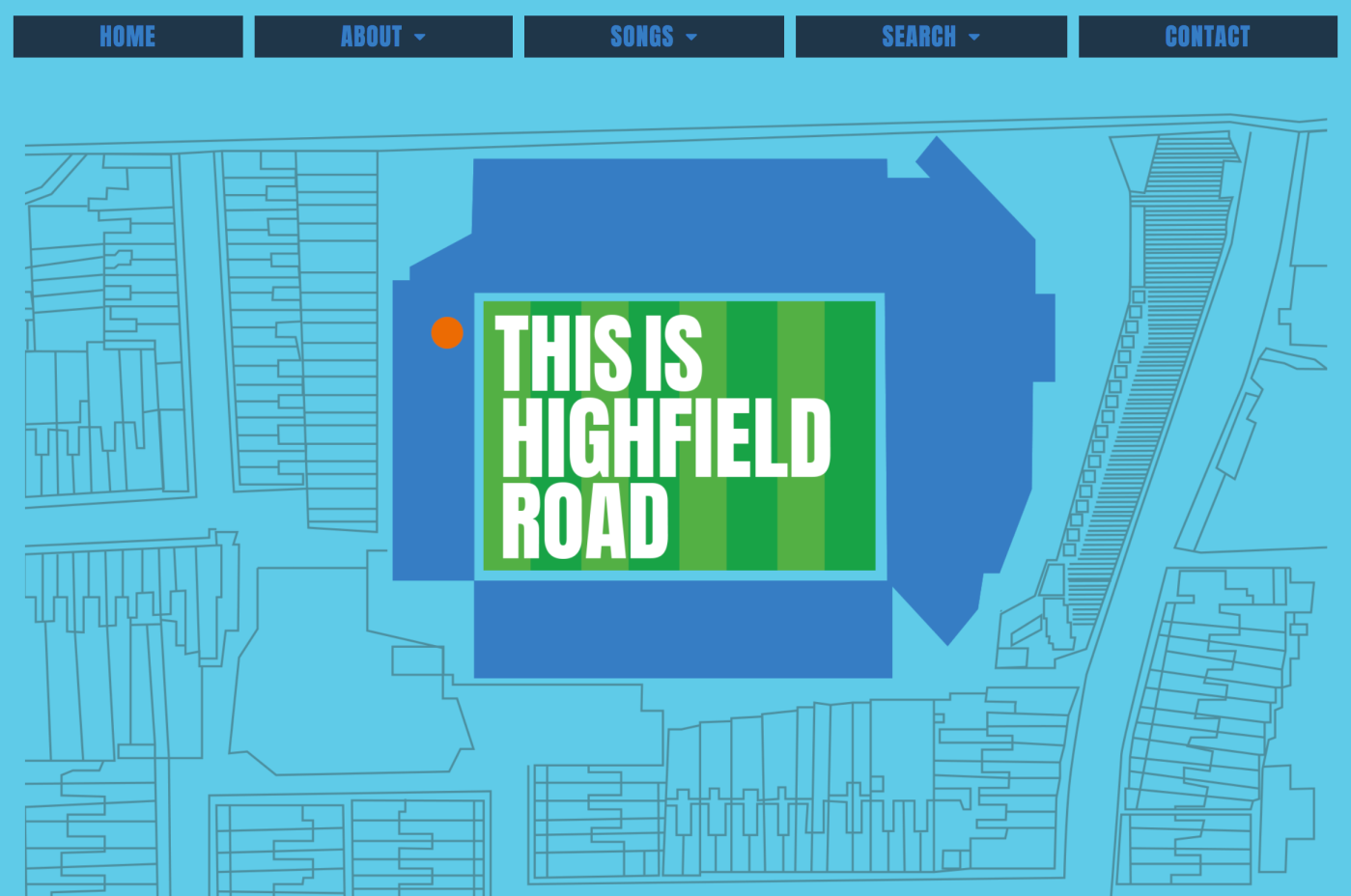 In 2004 I began research and development of a documentary sound project called This is Highfield Road. At the time my practice was largely driven by an interest in the semantics of sound, which I intuitively imagine as a system of communication operating simultaneously on two levels: on the one hand, semiotic and syntactical (including but not limited to the use of words in a given language), with embedded content carried within or by the medium of sound; and on the other hand, spatial and material, an aesthetic language in which the content is the heterogeneous matter of sound itself, and which we might describe simply as acoustic effect. I would propose that the culture of sound-making at professional football matches, with its traditions of song and chant, is a ritualised arena in which these two aspects of sounds semantic system are complex and highly developed. The project broadly promotes a vision of acoustic communication which is participatory and interactive, both in terms of its production and its reception.

This is Highfield Road, this is the Coca-Cola Championship, please welcome the Sky Blues of Coventry City!

This is Highfield Road is an online, documentary sound project, through which visitors can explore an archive of binaural sound recordings from the West Terrace of Coventry City Football Club’s Highfield Road stadium. The recordings document crowd sound at matches during the 2014-2015 season, Coventry’s last at the ground before moving to the newly built 32,600 capacity Ricoh Arena. The collection consists in 141 binaural field recordings, each edited from a longer match recording by a process of selection, topping-and-tailing, and the addition of fade-ins and outs. The archive is navigable via graphic match timelines, which tend towards revealing a sort of narrative of the match, or via a set of search criteria including: songs and chants, the original melody on which a chant might be based (Guantanamera, Guide Me O Thou Great Redeemer, John B. Sloop, Papa’s got a Brand New Pigbag, etc), whether that chant is voiced by the home or away support, match events (kick-off, corner-kick, penalty, goal, etc) and other auditory events (including for example, the referee’s whistle, whistles, and public address announcements).

The particular framing of each field recording in the collection is intended to bring about a focus on the semantics of football crowd sound by highlighting sequences of interactions: between home and away supporters, between the individual and the collective, or between the supporters and the game of football taking place on the pitch. All of these interactions require a what we might call competency: an ability to participate in sound-making by drawing from the context of the moment and a knowledge of history.

The above sequence (in italics) is a transcription from a match between Nottingham Forest and Coventry City. It begins with a chant from the Forest supporters, to the tune of The Saints. The chant (already an adaption of the unabashedly sexist Oh Nottingham is full of fun!) remembers Brian Clough’s 1978 team who were confirmed champions of the First Division following a goalless draw at Highfield Road. The essential message of the chant combines “we’ve won the the league, which is more than you’ve achieved” with “we won the league on your patch” and “your city is a sh*thole”. The Coventry supporters in the West Terrace respond using the same melody, on the one hand subverting the Forest fans’ own chant (“full of fun!”) and on the other responding with an equivalent insult (“your city is a sh*thole too!”). This is followed by a West Terrace chant sung to the melody of the Cuban folk tune Guantanamera, a double-insult firstly by describing Nottingham as a small town (not even a city, insignificant) and worse by suggesting Nottingham as a place of lesser importance to Derby (Forest’s fiercest rivals).

I suggest that there also exists a syntax of non-linguistic onomatopoeic vocalisations, a system of vocal sounds which escape easy characterisation, and which moreover only come into being when projected collectively (and thus which require competency), by which one can read the events of a football match. The archived features a filter for two categories of such vocalisations: booo and ohhh. The feature exists as a hint towards this system of onomatopoeic sounds: firstly to highlight its expressive and aesthetic potential, and secondly to illustrate that this system of sounds evades easy categorisation especially if we are talking about a system of collective vocalisations (that is, its phonemes consist in sounds made by a certain number of people in unison).

These are some of the themes of This is Highfield Road, although the project is presented very simply as documentary sound archive (with a particular resonance for the supporters of the Sky Blues for whom Highfield Road was home). It’s an artwork presented as an open-access resource, whose most competent audience is likely to consist in those who demonstrate both a capacity for patient and detailed listening, and a fluency in sound-making at the football.

Further information about Duncan Whitley can be found here.